1. SPONSOR: Leafs Tickets Contest being held at Firkin on Bloor on Oct. 4, 2019 is sponsored jointly by the Firkin on Bloor and Molson Coors Brewing Company (the “Sponsors”).

One (1) Winner will be randomly selected.

2. ELIGIBILITY – VOID WHERE PROHIBITED: To be eligible, entrants must be: (i) a resident of Ontario; and (ii) 19 years of age or older as of the start of the Promotion Period. Winner(s) must present valid Ontario ID to be eligible to win. Entrants are not eligible, if they are: (i) an employee, franchisee, owner, operator, representative or agent of The Firkin Group of Pubs Canada or Molson Coors Brewing Company (collectively, the “Sponsor” or “Prize Supplier”) or any of their respective affiliates and/or related companies, advertising or promotional agencies, contest judging organization, any participating stores or the prize suppliers; (ii) an employee or contractor of a provincial liquor authority, a beer distribution company, a participating licensed establishment or any liquor licensee authorized by a provincial liquor authority; (iii) anyone involved in the development and/or administration of the Promotion; or (iv) a member of the immediate family (defined as parents, siblings, children and/or spouse, regardless of where they live) or household (whether related or not) of any of the above persons.

3. HOW TO ENTER – RAFFLE TICKET PURCHASE REQUIRED: All Raffle ticket entries must be completed, submitted and received by end of the business day on October 4, 2019 to qualify (the “Entry Deadline”).

To enter the Raffle: entrants must dine-in at the Firkin on Bloor location in Ontario and purchase a Molsons Canadian or Coors Light to receive a Raffle ticket per purchase. Raffle ticket cards must be completed (the “Promotion Entry”) for a chance to win the specified prize at the end of the Promotion Period.

The Sponsor has no duty or obligation to entrants who enter the Raffle. Limit one (1) entry per Raffle ticket completed.

All entries are subject to verification at any time and for any reason. The Sponsor reserves the right to require proof of identity and/or eligibility (in a form acceptable to the Sponsor – including, without limitation, government issued photo identification) to participate in this Promotion. Failure to provide such proof to the satisfaction of the Sponsor in a timely manner may result in disqualification.

4. WINNER(S) & PRIZES: All entrants who meet the eligibility requirement(s) will be entered for a chance to win the Prize. One (1) Winner will be randomly selected at the end of the Promotion Period.

Winner(s) shall be responsible for any costs or expenses associated with the Prize not outlined as included above, including but not limited to: transportation, travel and/or medical insurance, drinks, meals, gratuities and all incidental and/or personal expenses. Winner(s) are not entitled to any monetary difference between the actual and stated value, if any.

Prize(s) are not transferable or assignable and must be accepted as awarded with no substitutions in cash or otherwise, except at the Sponsor’s sole discretion. The Sponsor reserves the right, in its sole discretion to substitute a Prize of equivalent monetary value if a Prize or any part of a Prize cannot be awarded as described for any reason.

The Releasees (as defined below) will not be responsible, however, if weather conditions, event cancellations, or any thereof or other factors beyond the Sponsor’s reasonable control prevent a Prize or any part of a Prize from being fulfilled. In any such event, a Winner will not be provided with a substitute Prize or cash equivalent. Prize(s) will only be released to the verified Winner. Return of any Prize/Prize notification as undeliverable may result in disqualification and selection of an alternate eligible Winner. If no participants are eligible, no Prize(s) will be awarded.

5. DRAWING: A random raffle draw will be conducted at the end of the business day on October 4th 2019 (2am on Oct. 5th), from among all eligible entries received.

A representative of the Firkin on Bloor location will make two (2) attempts to call the selected Winner via the information provided at the Promotion Entry.

If a selected entrant: (i) has not answered when being contacted on Saturday October 5, 2019; and/or (ii) cannot accept the applicable Prize as awarded for any reason whatsoever; then the applicable Prize will be forfeited and the Sponsor or it’s designated agents have the right but not the obligation, in their sole discretion and time permitting, to select an alternate eligible entrant. The odds of winning will depend on the total number of eligible entries received.

6. RELEASES, ETC.: By entering this Promotion, entrants agree and declare compliance; and release the Sponsor of any and all liability, which (among other things): (i) confirms compliance with these Official Raffle Rules; (ii) acknowledges acceptance of the applicable Prize as awarded; (iii) releases the Sponsor, any of their respective affiliates and/or related companies, advertising or promotional agencies, contest judging organization, any participating stores or the prize suppliers, provincial liquor authorities, beer distribution companies, parent companies and affiliates of the foregoing and all of their respective directors, officers, owners, partners, employees, agents, representatives, successors and assigns (collectively, the “Releasees”) from any and all liability in connection with this Promotion, their participation therein and/or the awarding and use/misuse of the Prize or any portion thereof; and (iv) agrees to the publication, reproduction and/or other use of their name, address, voice, statements about the Promotion and/or photograph or other likeness without further notice or compensation, in any publicity or advertisement carried out by or on behalf of the Sponsor in any manner whatsoever, including print, broadcast or the internet.

The Releasees do not make, nor in any manner are responsible or liable for: (i) any warranty, guarantee or representation, expressed or implied, in fact or in law relative to any Prize, including but not limited to its quality, merchantability, fitness for purpose or mechanical condition; and (ii) are not liable for injury, loss or damage of any kind resulting from the acceptance, use or misuse of any Prize, travel related thereto (as applicable), or otherwise from participation in this Promotion.

“The Toronto Maple Leafs”, “Leafs” and associated word marks and logos are registered trademarks of Maple Leaf Sports & Entertainment Partnership, used under license (or with permission) by Molson Canadian © 2020  MLSE and the National Hockey League. All Rights Reserved.

7. LIMITATIONS OF LIABILITY: Without limiting the limitations of liability set forth elsewhere in these Official Raffle Rules, and for greater certainty, the Releasees will not be liable for: (i) any incomplete or inaccurate information, which may occur in the capturing and/or processing of entries; (ii) the theft, loss, destruction or unauthorized access to, or alteration of entries; (iii) any failure of any entry to be captured or recorded for any reason; (iv) any typographical or other errors in the offer or administration of this Promotion, including but not limited to errors in advertising, these Official Raffle Rules, the selection and/or announcement of eligible Winner(s), and/or the distribution of any Prize(s); and/or (v) any combination of the above.

8. PERSONAL INFORMATION: By entering this Promotion, entrants consent to the collection, use and disclosure of their personal information for the purposes of administering the Promotion, including, but not limited to, for receiving one or more messages, whether electronic or not, from the Sponsor or its designated representative, which may provide entrants with information regarding the Promotion or otherwise further the administration of the Promotion. The entrant will be deemed to have solicited these messages from the Sponsor by virtue of entering the Promotion. By accepting the Prize, the Winner(s) consents to the collection, use and disclosure to the public of their name, address (city, province/territory), voice, statements and photographs or other likenesses for publicity purposes in connection with the Promotion in any media or formats, including but not limited to the Internet, without further notice, permission or compensation. Personal information will not otherwise be used or disclosed without consent. This section does not limit any other consent(s) that an individual may provide the Sponsor or others in relation to the collection, use and/or disclosure of their personal information.

9. RIGHT TO TERMINATE, SUSPEND OR AMEND: The Sponsor reserves the right to terminate, amend or suspend this Promotion, in whole or in part, at any time if any factor interferes with its proper conduct as contemplated by these Official Raffle Rules.

10. MISCELLANEOUS: Entrants who have not complied with these Official Raffle Rules are subject to disqualification from this Promotion and any future Promotion or other Promotion conducted by the Sponsor. All decisions of the Sponsor or any contest judging organization designated by the Sponsor are final and binding without right of appeal in all matters relating to this Promotion and by entering this Promotion, all entrants agree to be bound by these Official Raffle Rules. The Releasees will not be responsible for illegible, incomplete, lost, postage-due, misdirected or late entries, all of which will be void. All entries become the property of the Sponsor and will not be acknowledged or returned. No correspondence will be entered into except with selected entrants (or any other entrant(s) as deemed necessary by the Sponsor). This Promotion is subject to all applicable federal, provincial and municipal laws.

The Sponsor reserves the right at its sole discretion to disqualify, from this Promotion and any future Promotion or other Promotion conducted by the Sponsor, any individual that it finds or believes to be not in compliance with these Official Raffle Rules; to be tampering with the entry process or the operation of the Promotion, Promotion Website or Promotion Social Media Channel(s); or to be acting in an unsportsmanlike or disruptive manner, or with intent to annoy, abuse, threaten or harass any other person.

ANY ATTEMPT BY AN ENTRANT OR ANY OTHER PERSON TO DELIBERATELY DAMAGE ANY WEBSITE, SOCIAL MEDIA CHANNEL OR TO UNDERMINE THE LEGITIMATE OPERATION OF THE PROMOTION IS A VIOLATION OF CRIMINAL AND CIVIL LAWS AND, SHOULD SUCH AN ATTEMPT BE MADE, THE SPONSOR RESERVES THE RIGHT TO SEEK DAMAGES FROM ANY SUCH PERSON TO THE FULLEST EXTENT PERMITTED BY LAW.

11. LIQUOR AUTHORITIES: The provincial liquor authorities are not connected with this Promotion in any manner whatsoever and are not liable in any way whatsoever with regards to any matter relating to this Promotion.

13. PRIZE SUPPLIER: Entrants in this Raffle acknowledge that the Sponsor’s only involvement with this Promotion is as a Prize Supplier, and by entering, release the Sponsor from any and all liability with respect to the administration of the Promotion, including, without limitation, the delivery, non-delivery, acceptance, use and/or misuse of Prize(s) or parts of any Prize. The information you provide will only be used by Sponsor for the purposes of the administration and fulfilment of this Promotion. 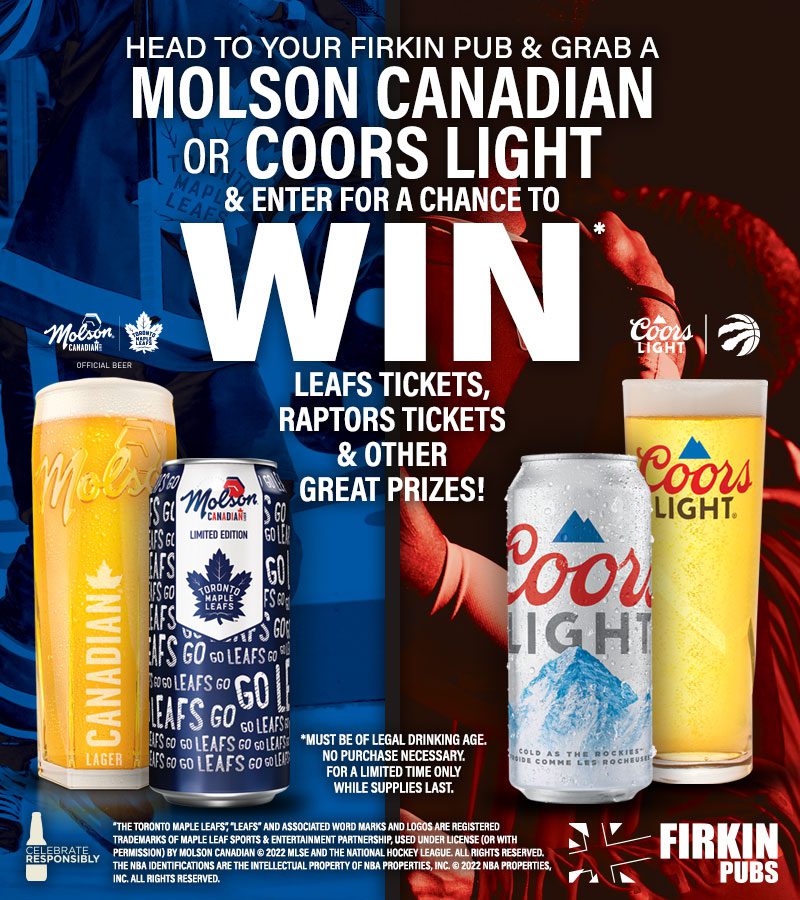